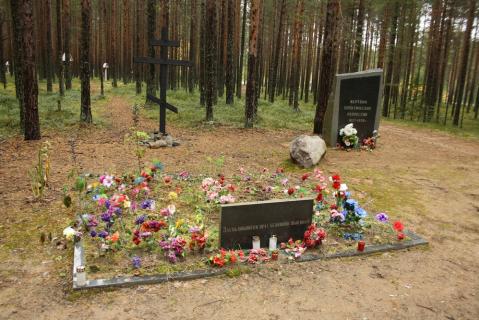 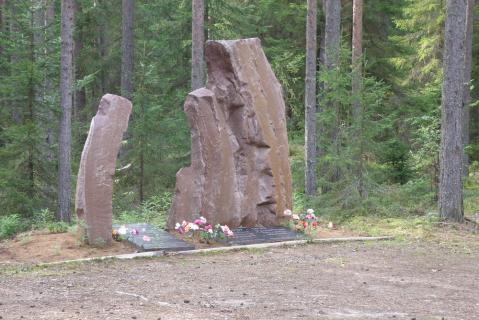 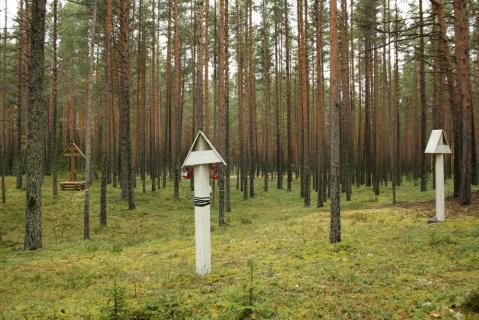 One location of mass execution during the Great Terror in Karelia was discovered by local inhabitants in 1997 in a wooded area four kms from Derevyannoe village (Prionezhsky district). In summer 1998 and 1999 Yury Dmitriev, a historian of political terror in Karelia, investigated the site. He discovered about 40 burials and revealed the presence of human remains in the ground. The Prionezhsky prosecutor’s office examined the evidence and confirmed that the NKVD had carried out mass executions there.

According to the prosecutor’s office the shootings took place during two periods: from 9 August to 15 October 1937, and from 26 September to 11 October 1938. The majority of the victims were under 40 years in age, and of various occupations, religious faiths and nationality. Most were sentenced to death for crimes committed under Article 58 (Counter-Revolutionary Activities). Yury Dmitriev determined the numbers executed (1,193 individuals) and most of their names. He was aided in the search for such detail by Ivan Chukhin who had created a database of those shot in 1937-1938. By nationality the most numerous of the victims at Krasny Bor were Finns and Karelians. In 2000 a list of those shot there was published in the Petrozavodsk newspaper, Severny kuryer.

The memorial cemetery was opened on 31 October 1998. The Prionezhsky district administration cleared and tided the territory and provided funds for memorials on the central square. The cemetery is 2.9 hectares in area and officially there are 50 individual burials there. Within the cemetery there are several memorial areas and individual memorials on the grave mounds, wooden crosses, modelled on the style of the northern golubets, to which relatives of the victims have attached their own commemorative signs.

Those exhumed in 1997 were reburied on 30 October 1998 in a common grave by the entrance to the cemetery. Two granite stones stand over the grave with the inscriptions, “To the victims of political repression” and “Here lie the remains of the slain innocents”. On 30 October 2006 Yury Dmitriev organised the inauguration of a memorial “to the victims of Red Terror”; on 17 October 2009 the commemorative cross erected by the Karelian Society of Cossacks was consecrated; and on 30 October 2010 a memorial cross was erected by the Sixth Congress of Karelians.

There is also a monument here to the fallen of the Great Patriotic War. It was installed before the burial pits of the executed were discovered. In 1941 the frontline in the war against the Finns passed through the clearing. It was then defended by combined police and NKVD units and their remains are also buried here. When the memorial cemetery was established, the organisers decided to leave the war memorial where it was.

The lists refer to  3,794 shot “near Petrozavodsk”. As well as Krasny Bor this general location includes the remains found at Sulazhgora and Besovets which were reburied in the Zaretskoe graveyard [10-01] in 1991.

Ceremonies
Nature of area requiring preservation
Administrative responsibility and ownership, informal responsibility for the site
On land under the control of the Prionezhsky district administration. Designated a site of cultural heritage (order No 273, 25 November 2004, of the Karelian Republic’s Ministry of Culture and included in the Unified Register of Sites of Cultural Heritage (monuments of historical and cultural significance) by order No. 362 r-P, 8 October 2007, of the Karelian government. The memorial is cared for by the administration of the Derevyannoe rural district and the Prionezhsky district administration.
Sources and bibliography

Yury Dmitriev (ed), A forest red with blood: a list of those shot in Krasny Bor, Petrozavodsk, 2000

“The Krasny Bor memorial”, Virtual Museum of the Gulag [retrieved on 26 May 2022]

Reply by the Karelian Republic Ministry of Culture