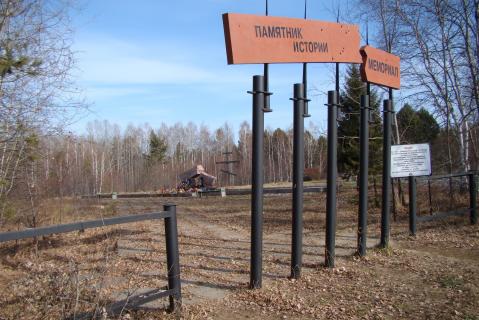 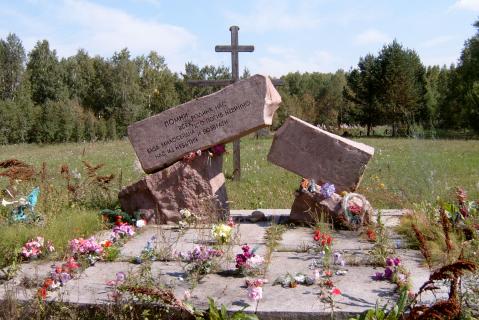 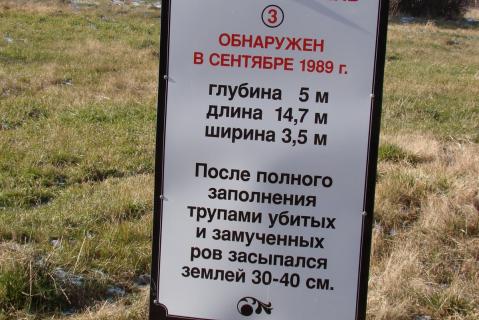 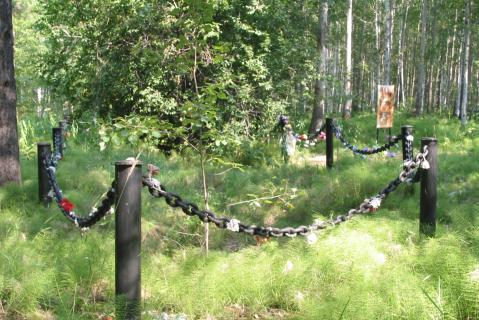 The Pivovarikha landmark, locally known as the “Lunar King’s Dacha”, is a forested area on the outskirts of Irkutsk. In the early 1930s an area of 168 hectares next to the Pivovarikha settlement was fenced off and handed over to the Irkutsk Region NKVD. There it would organise its own State farm, dachas for NKVD officers and a Pioneer camp for their children. In 1937 a “special” zone was separated from this territory for the burial of the executed: its exact extent is not known. The Irkutsk Region KGB later estimated that 15-17,000 victims of the Great Terror were buried here.

In the 1950s the area became a breeding station for the dogs used by the security services. At the same time part of the forested area was cleared to extend the Irkutsk airport landing strips; part of the burials, perhaps, today lie under the airport.

Although the area was off-limits to anyone else local inhabitants were aware of the burials. In the 1970s searches were made to find them but this was a private initiative. Only in summer 1989 could official exploratory and investigative work begin. The Irkutsk Region KGB, the prosecutor’s office, staff from Irkutsk University and activists of the regional Memorial society were all involved. Preliminary interviews with local inhabitants and former NKVD officers and analysis of available maps were followed by test probes. The first trench containing buried human remains was discovered on 29 September 1998: the remains of 304 people were exhumed and sent for specialist analysis. Soon the location of a further two trenches was established (no bodies were exhumed there). The prosecutor’s office opened a criminal investigation and forensic examination showed that the burials were made in 1937-1938. There were estimated to be a total of 5,000 victims in the three trenches.

The findings of the prosecutor’s office provided the official basis for creating a memorial complex at the site. In October 1989 the Irkutsk Region authorities designated the area a memorial cemetery. On 11 November that year the Memorial complex “in Memory of the Victims of Political Repression” was formally opened and the remains of the 304 victims were reburied in a common grave. In 1990-1991 exploratory work continued and another burial was discovered. Since then, no more explorations of the site have been carried out.

In 1992 a Wall of Sorrow was built bearing personal memorials. That year paths lined with benches and trees were laid out in the cemetery. Today the complex covers 7 hectares of land. At its centre stands a granite memorial bearing the words: “Remember us all, O Motherland, innocent victims. Be merciful and bring us back from oblivion”. A granite boulder has been placed next to the first common grave and four more collective graves have been created. Irkutsk aeroplane pilots helped to raise a wooden Orthodox cross there. As of 2014, over 300 personal memorials bearing names of Great Terror victims had been added to the Wall of Sorrow or nearby.

The memorial is some way from populated areas and is not guarded. As a result, there have been several incidents of vandalism in the 21st century. After 2004 the local media discussed a proposal of the Irkutsk district administration to let a large part of the “Lunar King’s Dacha” to be used for residential construction. There has also been a plan to extend the airport. Public concern was expressed that exploratory work in the “special” zone was incomplete and that as yet undiscovered burials might therefore be lost. There are reports that in 2016 geophysical survey work began on the orders of the governor of the Irkutsk Region to define more exactly the boundaries of the burials. In autumn 2016, there was work to tidy up the memorial cemetery.

The incomplete Book of Remembrance, Victims of political repression in the Irkutsk Region: in Remembrance and a Future Warning (8 vols. 1998-2006), includes 25,800 biographical entries on those shot or sent to the camps.

Ceremonies
Nature of area requiring preservation
Administrative responsibility and ownership, informal responsibility for the site
On the property register of the Irkutsk Region Administration. Care and maintenance are provided by the Irkutsk district administration. Declared a historical monument of regional significance (decree No. 303-p, 31 October 1997) by the governor of Irkutsk Region.
Sources and bibliography

“Work on the site of the burials of victims of political repression in Pivovarikha will end before 30 October”, Oblastnaya newspaper website, 12 October 2016

Reply from the Irkutsk City Administration

Reply from the Irkutsk Region Administration

Reply from the Irkutsk district administration