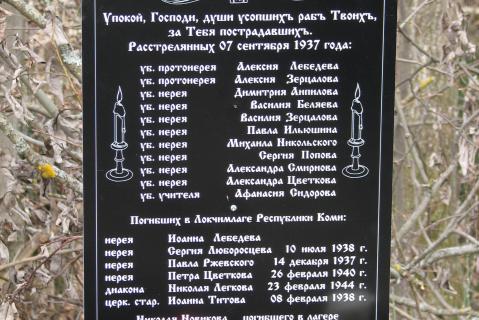 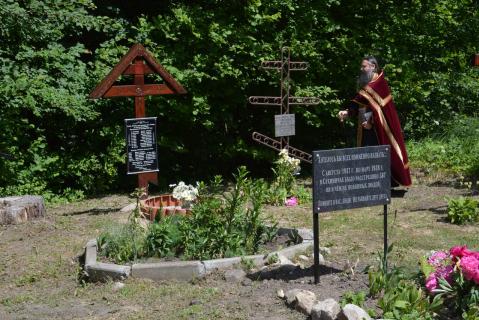 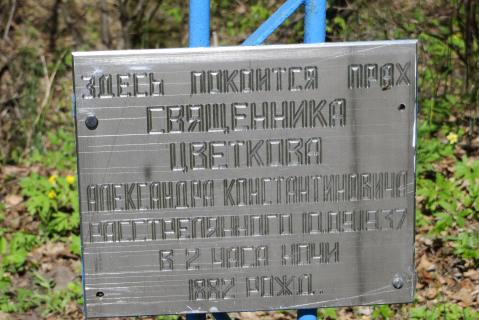 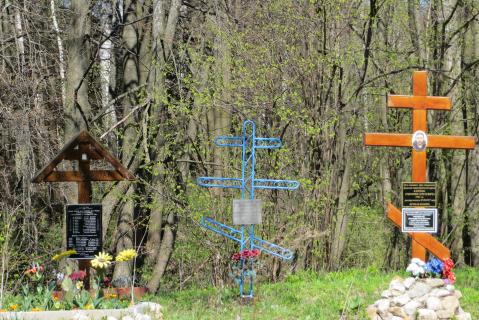 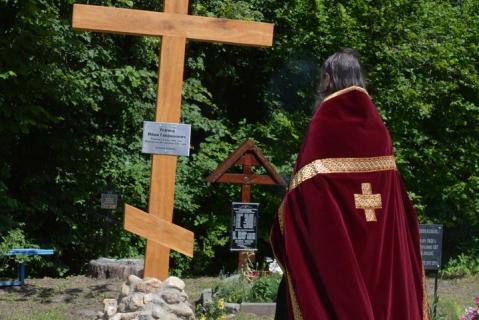 During the Great Terror the ravine on the outskirts of the city, near Bordukovo village was used for executions and burials. The numbers shot here have not been established. Only the names of 14 individuals executed on 7 September 1937 are known: 7 Orthodox priests, three priests of the Old Believers and a teacher. In the 1980s a local inhabitant, a former guard at the city prison, indicated the location of the burial and named one of those shot there, Father Alexander Tsvetkov. The priest’s daughter then erected the first (metal) commemorative cross on the site. Subsequently relatives of those executed there added two more memorial crosses.

In 2008 the descendants of the priest Lebedev placed a wooden cross there inscribed with the following words:

“Аlso those who died in the Komi Republic, in Lokchimlag: Father Ioann Lebedev, Father Sergy Lyuborostsev on 10 July 1938; Father Pavel Rzhevsky on 14 December 1937; Father Pyotr Tsvetkov on 26 February 1940; Deacon Nikolai Legkov on 23 February 1944; church elder Ioann Titov on 8 February 1938; and Nikolai Novikov who died in the camp in Tavda, Sverdlovsk Region, on 25 December 1944.

“May they be remembered forever and ever”.

In 2011 a third commemorative cross was erected through the efforts of the daughter of Father Grigory Karpov of the Old Believers. Father Alexei Kazakov, a priest from Sukhinichi, laid the foundation for the cross and a flowerbed and also consecrated the cross. That year a list of the 14 victims with biographical notes from the Kaluga Region FSB archives was published in the Kaluzhskie gubernskie novosti newspaper.

For a long while the memorial area had no official status. Relatives of those who died and concerned citizens looked after the crosses. From time to time, services for the dead were held there.

Subsequently relatives of those shot added two further crosses, to the peasant V.F. Tarutayev in September 2016 and to the Old Believer I.G. Usachev on 18 May 2017. In 2016 after a formal assessment was made the memorial area gained the status of a site of cultural heritage of local importance and was added to the Unified State Register of Monuments of History and Culture. On 8 June 2016 the Sukhinichi memorial was consecrated at a ceremony attended by members of the district administration, the public and relatives of the executed priests.

In spring 2017 vandals tore an icon from the cross, split the photograph of Father Grigory Karpov and wrecked the flower-bed. Activists restored the memorial; the local authorities did not offer to help. On 17 September that year N.V. Golubyatnikova who had spent many years commemorating those who died in the Great Terror placed a memorial plaque there to all who had been shot.

From the Abyss of Oblivion: A Book of Remembrance for Arrested Kalugans (4 vols. 1993-2003) contains more than 17,000 biographical entries of those shot or sent to the camps

Ceremonies
Nature of area requiring preservation
Administrative responsibility and ownership, informal responsibility for the site
On land under the control of the Sukhinichi district administration. By order No. 34318-p (14 March 2016) of the RF Ministry of Culture included in the register of sites of cultural heritage of local (municipal) importance
Sources and bibliography

“The Sukhinichi memorial to the Victims of Political Repression has been added to the register of sites of cultural heritage”, Official website of the Presidential Council for the development of civil society and human rights, 6 March 2016

In the Sukhinichi district a memorial to the Victims of Political Repression has appeared, 9 June 2016 [retrieved, 27 May 2022]