Abez [C]** Memorial "To victims of the totalitarian regime" 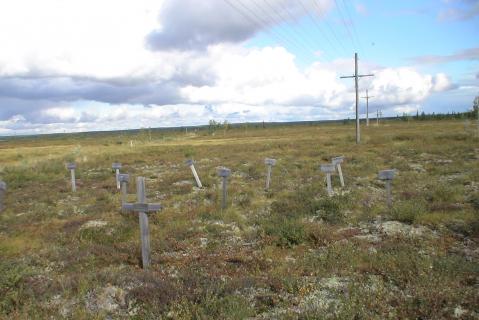 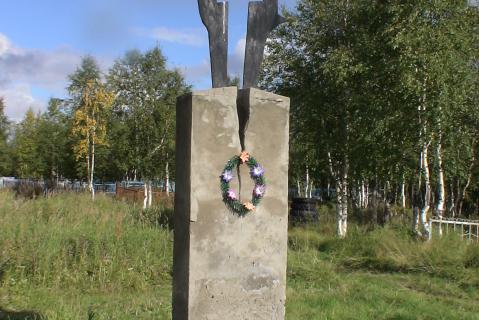 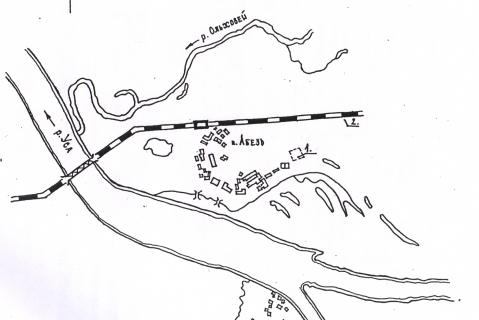 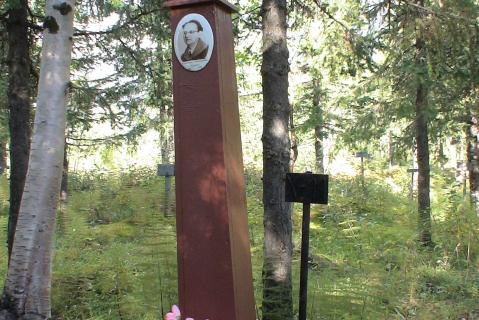 The Memorial cemetery is located on the outskirts of Abez. The first burials date back to 1947-1948. Most burials were made in 1949-1957 when prisoners from Minlag camp outpost No 1 (the Abez camp for Minlag disabled) were interred here. At first they were buried in trenches; after 1952 in individual graves. Posts bearing a number or letter on a plaque were erected on the graves. In total, about 2,000 people were buried here.

The names of over 1,000 Minlag prisoners buried in this cemetery have been restored from the archives. Creating memorials and tidying the cemetery began in 1989 when a bell was erected there and a memorial plaque with the words, “Thousands lie here”. The first memorial was a pyramid of sheet metal with a wreath of barbed wire and a wooden plaque: “To the innocent victims of repression, 1930s-1950s. May they never be forgotten. Peace eternal.”

In 1990, through the efforts of the Vilnius Society of Political Exiles, a memorial Flaming Cross was erected 200 metres from the cemetery. It was designed by Lithuanian sculptor Jonas Judisus, son of General Judisus who died in a Soviet labour camp. In July 1996, the Poshuk Society from Lviv put up a metal cross with an inscription in Ukrainian: “May we never forget the political prisoners of Intalag, who died in Abez in 1946-1954”. In 1999, two commemorative crosses were erected in memory of Poles and Belorussians who died in captivity. In 2003, the Inta museum of history and local studies reconstructed in metal about 500 of the surviving wooden number plates; this work continued in 2009-2012. Since 1990, moreover, several dozen individual memorials have been created within the cemetery, to the philosopher Lev Karsavin (1888-1952), the historian Nikolai Punin (1888-1953), General Jonas Judisus (1892-1950) and many others.

Because of frequent transfers of prisoners between camps it is usually very difficult to locate the final resting place of any Gulag inmate.

Ceremonies
Nature of area requiring preservation
Administrative responsibility and ownership, informal responsibility for the site
On land under the control of the Inta town district administration. A historic and cultural monument of republican significance: edict No 6 of 14 January 1999 of the head of the Komi Republic. The Inta museum of history and local studies takes responsibility for the maintenance and upkeep of the memorial.
Sources and bibliography

Archive of the Inta museum of history and local studies

Reply from the Komi Republic Ministry of Culture