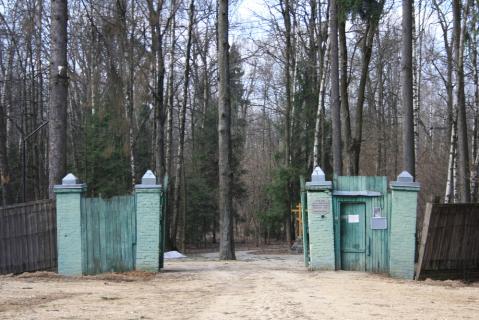 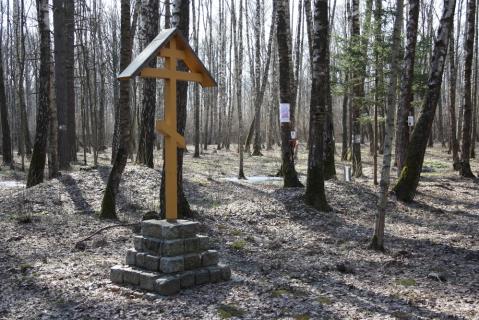 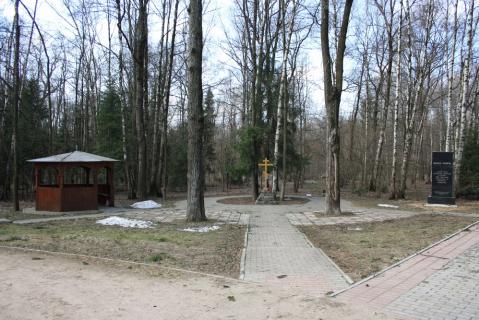 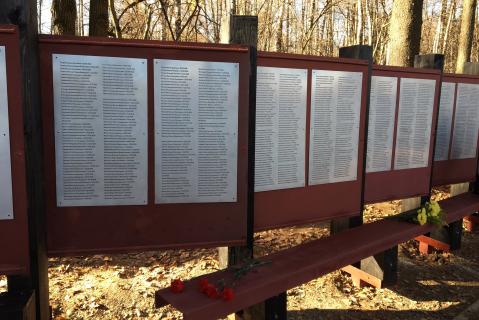 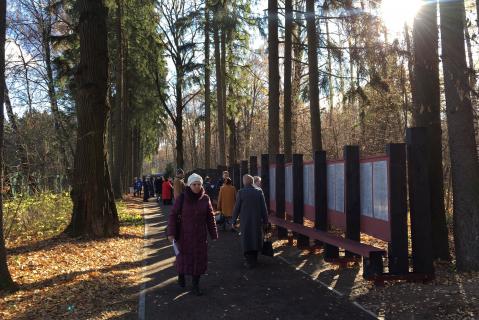 In 1937-1941 Kommunarka, an NKVD “special site”, was one place where mass burials took place in the Moscow Region, during and after the Great Terror (1937-1938). They began interring bodies on 21 October 1937 and continued to do so systematically until mid-1938. They resumed in 1939 and started again, it is assumed, when war broke out in 1941. Bodies were buried in previously prepared trenches.

When asked in the late 1980s and early 1990s former NKVD employees and local residents talked of executions at Kommunarka, but it has not been documented so far. In the expert findings of 6 April 1993 by the FSK archive service it is indicated that between 10,000 and 14,000 were buried there. Biographical details for 4,527 people, shot between 2 September 1937 and 16 October 1941, were published by the Memorial Society in its first lists of those shot at Kommunarka, published in 2000: the information was obtained from the FSB central archive.

Until the late 1990s the territory remained under the control of the Moscow City and Moscow Region FSB and was closely guarded. In 1999 it was transferred to the Russian Orthodox Church under the care of the affiliated church (metochion) of the St Catherine Monastery at Vidnoe, Moscow Region (once the NKVD Special Prison [1938-1953] known as Sukhanovka). In July that year a commemorative cross was placed at the entrance to the territory. In November 1999 on the initiative of the International Memorial Society and the relatives of those executed at Kommunarka a memorial plaque was attached to the brick support of the main gate: “In this earth lie thousands of victims of political terror in the 1930s-1950s,” it reads. “May we never forget them!”

In 2001 preliminary geophysical investigation was conducted to determine where the burial pits and trenches lay. During that decade memorials of various sizes, collective and personal, were placed in the grounds at Kommunarka. In 2007 the church of Russia’s New Martyrs and Confessors was consecrated there.

In 2018 the History of the Gulag Museum in Moscow, supported by the Remembrance Foundation, researched the territory of the “special site”. Led by archaeologist Mikhail Zhukovsky and Anatoly Kantarovich, head of archaeology at Moscow University’s history faculty, a retrospective analysis was made, using the aerial reconnaissance photos taken by the Luftwaffe on 26 August 1942 and contemporary methods of computer-aided photogrammetry. There was also visual investigation of the site and several stratigraphic sections were made. The research revealed that the mass burials were concentrated in the farther western corner of the site on the right bank of the Ordynka River. The existence was confirmed of 47 pits measuring 5-15 metres long and 2-5 metres wide, each covering between 10 and 60 square metres. The total area of the discovered pits and trenches amounted to roughly 1,250 square metres. After studying approximately 75% of the burials the researchers concluded that they probably contained the remains of up to 6,600 people. It appeared that the eastern and southern parts of the territory were not used for mass burial.

Some were ordinary people. The majority were members of the Soviet elite, accused of participating in the “Right-Trotskyist conspiracy” for which Yagoda, Bukharin and other prominent Bolsheviks were shot following the Third Show Trial in March 1938. Also among those buried at Kommunarka were recently executed members of the Provisional Government (February-October 1917), noted politicians of the Tsarist regime and leading State officials from the Baltic States incorporated into the USSR in 1940.

Public controversy followed after it was discovered that the organisers had decided to create a single list of names that also included NKVD officials and torturers who were themselves later shot. Commenting on the subsequent discussion the new chairman of the Memorial Society, Jan Raczynski, “Everyone is entitled to a grave.  It was the Soviet regime that destroyed those it numbered among its enemies so completely that no grave or public mention of them remained”. An information centre detailing the biographies of those whose remains lie at Kommunarka opened in May 2021.

A ten-volume Book of Remembrance has been published for the city of Moscow and its victims: one each for the Vagankovskoe Cemetery (1995), the Kommunarka “special site” (2000) and the Donskoe Monastery (2005); and seven volumes for the Butovo Firing Range (1997-2003). Together they provide biographical entries on 31,900 who were shot or sent to the camps; this total includes brief notes on 5,590 victims of political repression who have not been formally rehabilitated.

Ceremonies
Nature of area requiring preservation
Administrative responsibility and ownership, informal responsibility for the site
On land under the control of the Novomoskovsky district of Moscow. Owned by the Moscow Patriarchate of the Russian Orthodox Church. By order No 39-P (10 February 2009) of the Moscow Region ministry of culture designated a site of cultural heritage of regional significance. The territory is cared for by the metochion (embassy church) of the Saint Catherine monastery in Vidnoe (Moscow Region).
Sources and bibliography

A.B. Roginsky, “Epilogue to the lists of those buried at Kommunarka”, website of the International Memorial Society [retrieved, 29 May 2022]

The church of Russia’s New Martyrs and Confessors: the Kommunarka special site, a historical monument [retrieved, 29 May 2022]

“The Kommunarka Controversy”, The Dmitriev Affair website, 6 November 2018 [in English]

Carl Schreck, Nikita Tatarsky, “A tortured past: victims and perpetrators side by side on a Russian memorial”, Radio Liberty, 27 December 2018 [in English]